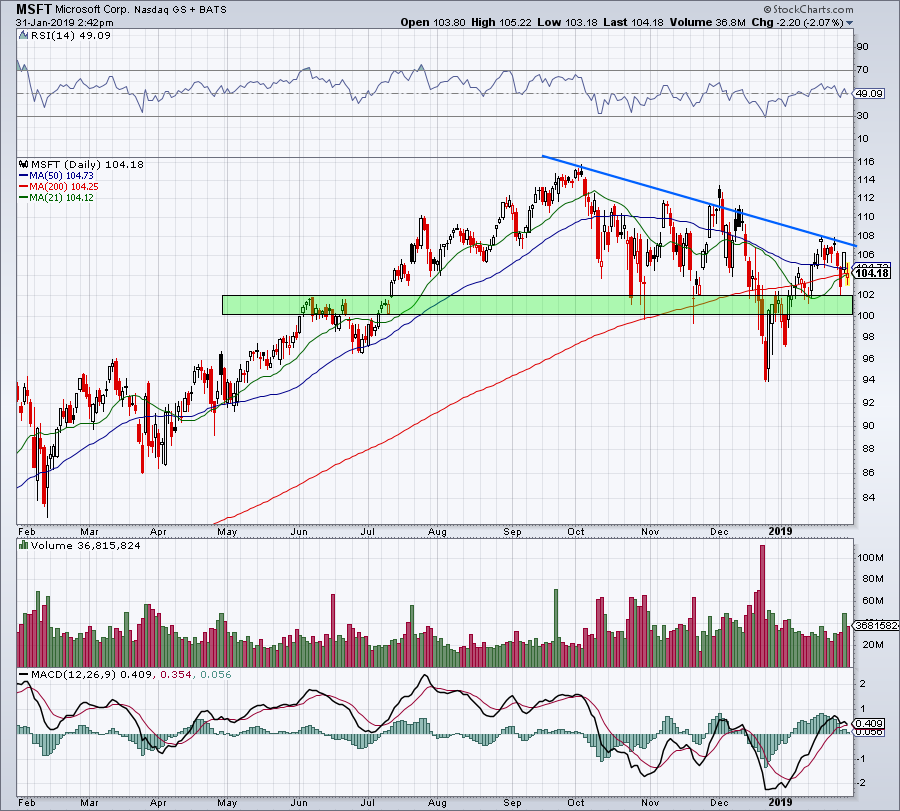 After a well-received round of earnings on Wednesday evening and Thursday morning, U.S. stocks are again moving higher. Investors are shifting from a fear of losses to a fear of missing out, jumping on the boat even after big moves higher. Let’s look at some of the biggest top stock trades for Friday.

Shares of Microsoft (NASDAQ:MSFT) are in a precarious spot now after failing to rally on earnings. It’s trading smack in the middle of its 21-day, 50-day and 200-day moving averages, which are all within about 60 cents of each other.

It’s got downtrend resistance just above and support in this $100 to $103 region just below. If tech stocks continue higher and the Nasdaq holds up, it’s hard to imagine that MSFT will break below support. Below $100 and my concerns would rise, though.

Over resistance, and Microsoft could fly to its prior highs. 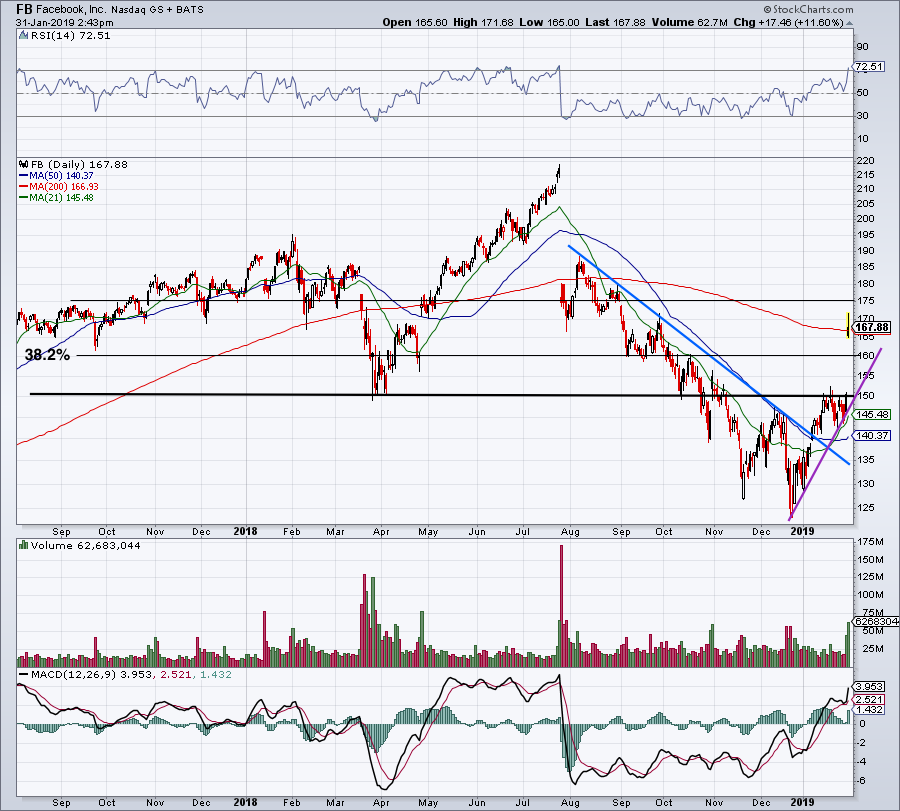 Shares of Facebook (NASDAQ:FB) are surging — finally — up almost 12% following its better-than-expected earnings results. FB stock was consolidating nicely below $150, which were the March/April lows from the Cambridge Analytica scandal.

With Thursday’s move, shares are erupting over this mark and are now pinning near the 200-day moving average. If it can’t hold the 200-day, it will likely serve as temporary resistance.

However, given how much pressure FB has been under over the past few quarters, a continued move is certainly not out of the question. I find it worthwhile to mention that today’s high perfectly kissed the 50% Fibonacci retracement level from the July highs to the December lows. If FB pulls back and/or consolidates, look for the 38.2% Fib to buoy it as well as uptrend support (purple line). 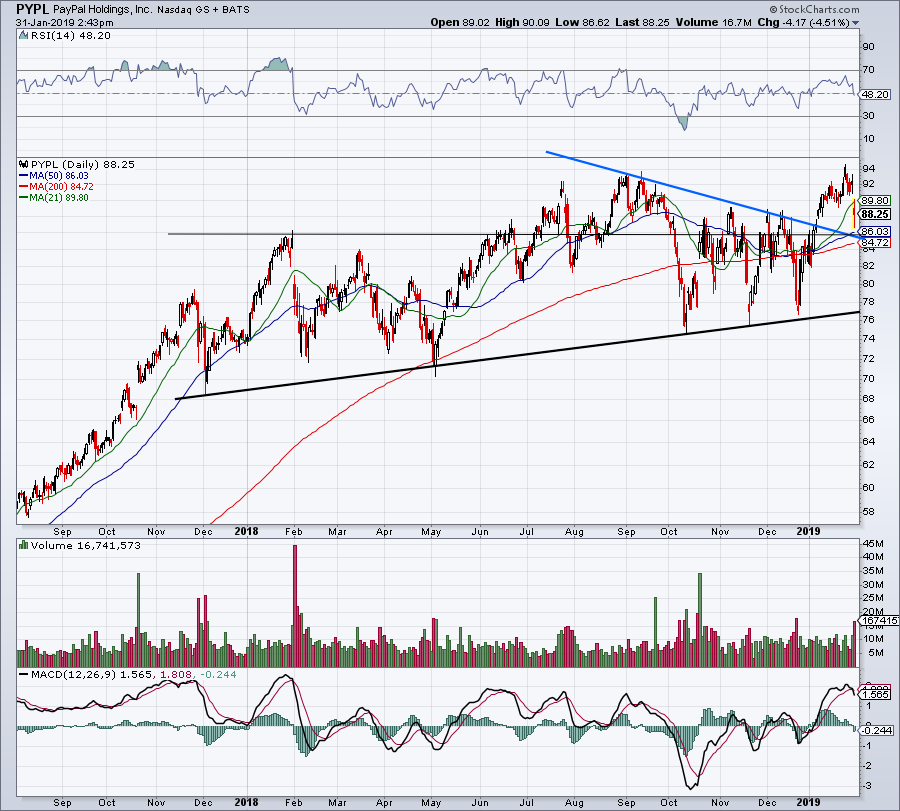 Shares of PayPal (NASDAQ:PYPL) are pulling back slightly on the day, contrary to what the bulls were hoping for when PYPL reported earnings. However, it’s holding up over the backside of prior downtrend resistance and is a great company.

I like this one from the long side, with prior downtrend resistance, the 50-day and the 200-day moving average all just below. Investors buying on Thursday, or Friday on another slight decline, can use the $84 level as their stop-loss. 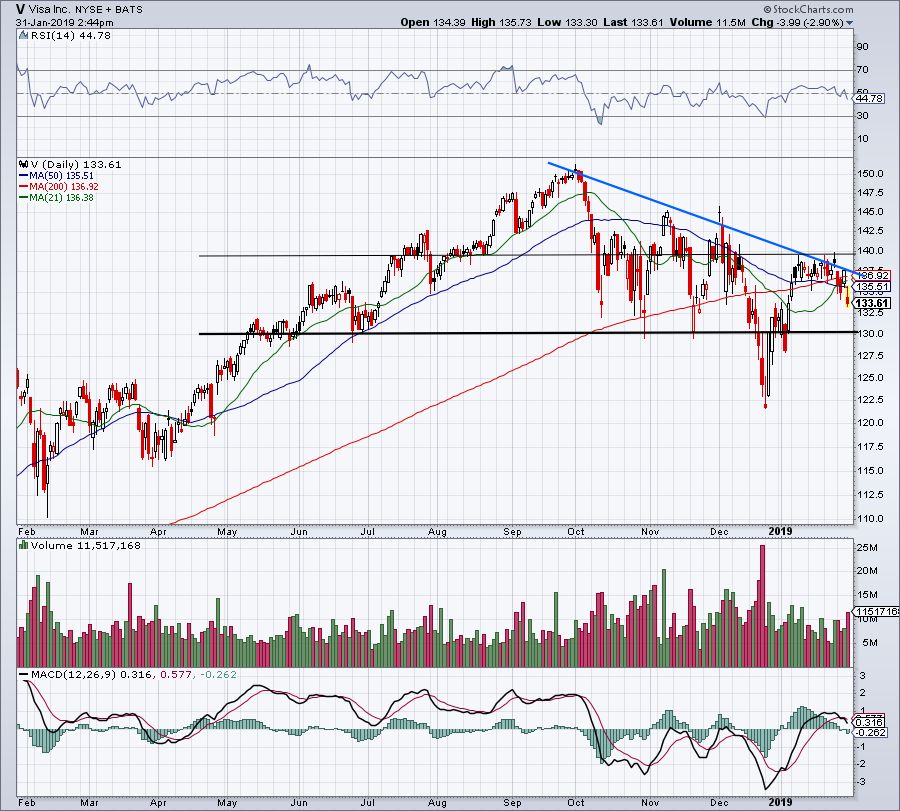 Visa (NYSE:V) has a similar — albeit not identical — chart to Microsoft. The main difference is that V doesn’t have as much support below it. On a day where MasterCard (NYSE:MA) is running, V is under pressure following its earnings results.

Keep it simple: support rests down near $130 and V will need to close above $138 to trigger a breakout. This one has a great long-term story and investors should feel comfortable nibbling a longer-term position down here. 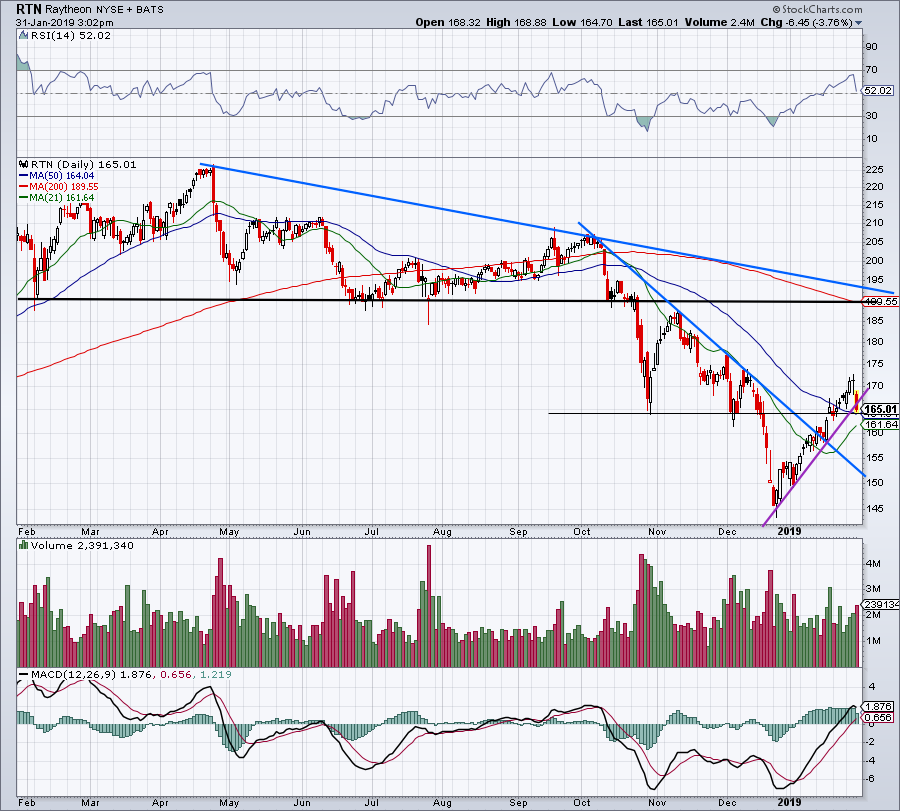 Shares of Raytheon (NYSE:RTN) are down slightly, falling about 4% after reporting earnings. But this one has come up quickly from its recent lows and is also a high-quality company.

I like RTN — although perhaps not as much as a few other in-favor stocks at the moment — particularly if it’s able to hold its 21-day and 50-day moving averages. If so, a continued rally is not out of the question. Over time, it may even make its way back up to the $185 to $190 level.

Below $160 and RTN would raise a red flag for me, but if I am a short-term investor or long-term trader (however you want to think about it) I would not be all that disappointed with Thursday’s fall following its big rally.

Currency Traders Looking for Havens Seek Refuge in Volatility
US Dollar, Euro, Gold, Dow Forecasts &amp; More for the Week Ahead
Oil rises on short-covering despite growing fears over coronavirus
USD Forecast: US Recession Odds Rekindled as Coronavirus Festers
Is the Bottom in for Occidental Stock Ahead of Its Q4 Results?