Disney has been quiet on details about its streaming service Disney+ heading into its investor day Thursday afternoon.

Wall Street is bulled up anyway. The company’s shares have rallied nearly 9% since their late-March lows, while the S&P 500 is up 3%.

Mark Newton, technical analyst at Newton Advisors, expects an even bigger breakout ahead.

“I’m very constructive on Disney here,” Newton told CNBC’s “Trading Nation” on Thursday. “It’s been sideways for quite a long time, since almost 2015. But this has really been a nice bullish base it’s set up after its six-year advance off the 2009 lows.” 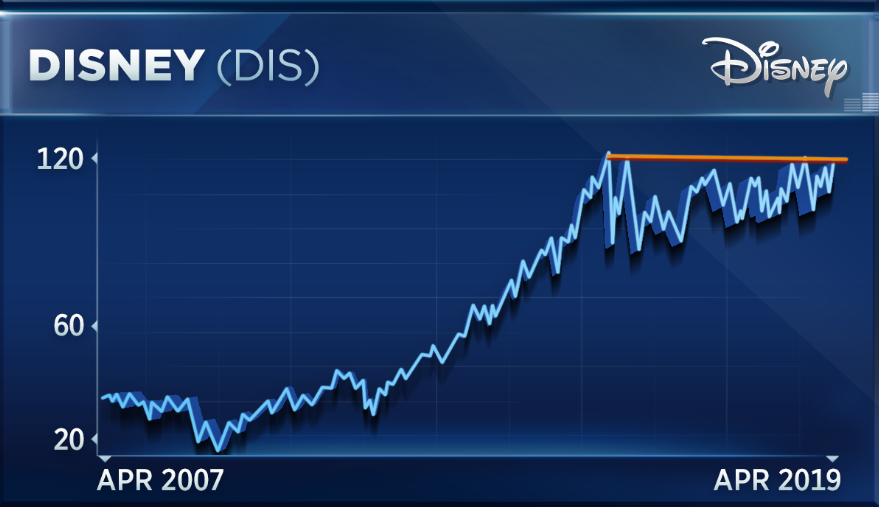 “My thinking is it gets up to $120 which is a key level and above that it will allow for this longer-term rally to continue,” said Newton. “For most that are looking short term, yes it does look overbought but it’s really important to have a longer-term perspective and look at the stock since it’s traded from 2009.”

Disney shares need to rally just 3% to break above $120. They briefly broke above that level in December for the first time since late 2015.

Erin Gibbs, portfolio manager at S&P Global, is also long-term bullish on the stock even though she expects a slight earnings contraction this year.

“The big thing is that they just completed their acquisition of Fox’s Twenty-First Century Entertainment so that premier content along with their own content, it completely makes sense that they should get into the streaming service,” Gibbs said Thursday on “Trading Nation.” “Even if they have a little bit of margin contraction just this year, looking to 2020, they look really strong so they really have this premier content that looks to be really valuable going forward.”

Disney’s gross margins in its December-ended quarter declined to 39 percent, down from 41 percent in the same quarter two years earlier. Analysts expect sales growth to accelerate over the next three quarters, topping 27 percent in the final three months of this year.

Disclosure: S&P Global has a position in DIS.

King Dollar rules as virus threatens global growth
Is the Bottom in for Occidental Stock Ahead of Its Q4 Results?
This Is Not The Time to Panic Out of Microsoft Stock
Stocks making the biggest moves after hours: Shake Shack, HP, Moderna and more
Russia’s Norilsk says carmakers won’t switch from palladium