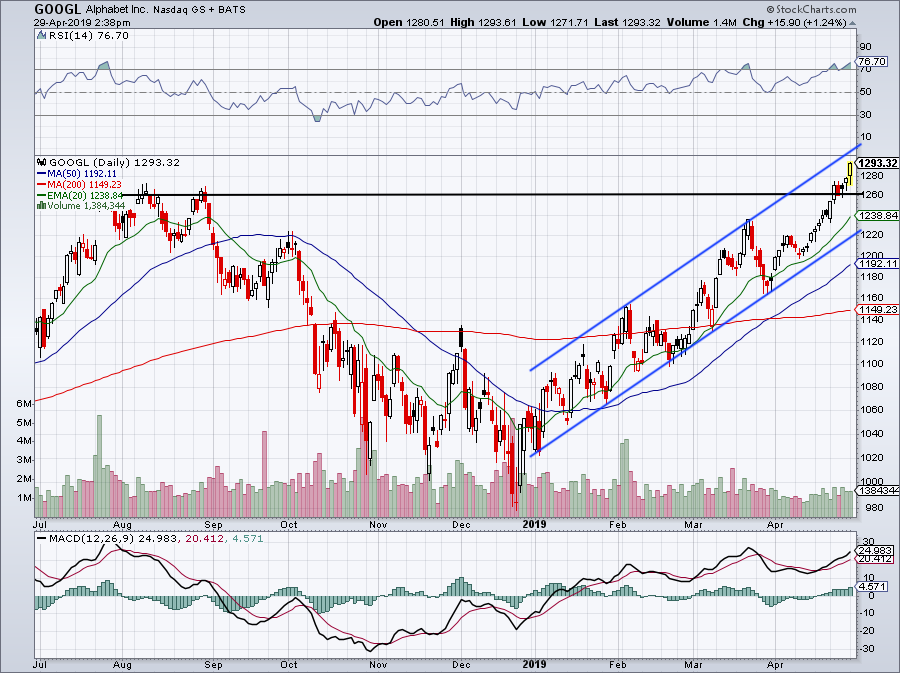 In another sleepy trading session, U.S. stock bumbled along through morning trading before drifting higher into the close. Last week was full of big earnings reports, but this week is also loaded, with Alphabet (NASDAQ:GOOGL, NASDAQ:GOOG), Apple (NASDAQ:AAPL) and others all reporting. Here are the top stock trades we’re watching going into Tuesday.

On Monday after the close we’ll hear from Alphabet. I like this company as much as the next investor, but it’s hard to get overly bullish going into the report when it’s up so much.

While lagging many of its FAANG peers, shares are still up almost 20% from the January lows. The stock is up 12 of the last 13 sessions and is up more than $100 per share in less than a month. With an RSI reading of 77, it doesn’t help matters either.

That said, I’m not bearish on GOOGL as a company. We could get similar action to what we saw in Amazon (NASDAQ:AMZN) last week, which was a muted open and a 2.5% rally by day’s end. GOOGL could certainly climb on good numbers, but I expect the rally to be modest, likely toward channel resistance.

On a pullback, I want to see $1,260 hold as support. If it can’t, GOOGL can pullback to the 20-day moving average and/or channel support without breaking its uptrend.

Bank of America (NYSE:BAC) has been consolidating near $30, but finally made a move to $31 on Monday.

I love that this name is above long-term downtrend resistance and the action on Monday is promising. However, I can’t blame anyone who wants to lighten up on their longs (I did), as BAC moves into a potential area of resistance.

$31 put a lid on BAC from July to September. If it pushes through, the next level of resistance is at $32-ish. I don’t hate BAC after Monday’s rally, as it could continue rallying this week. But keep in mind that there’s an FOMC announcement on Wednesday and the jobs report on Friday.

Could BAC rally into the Fed event? It’s possible, but expect some volatility either way. 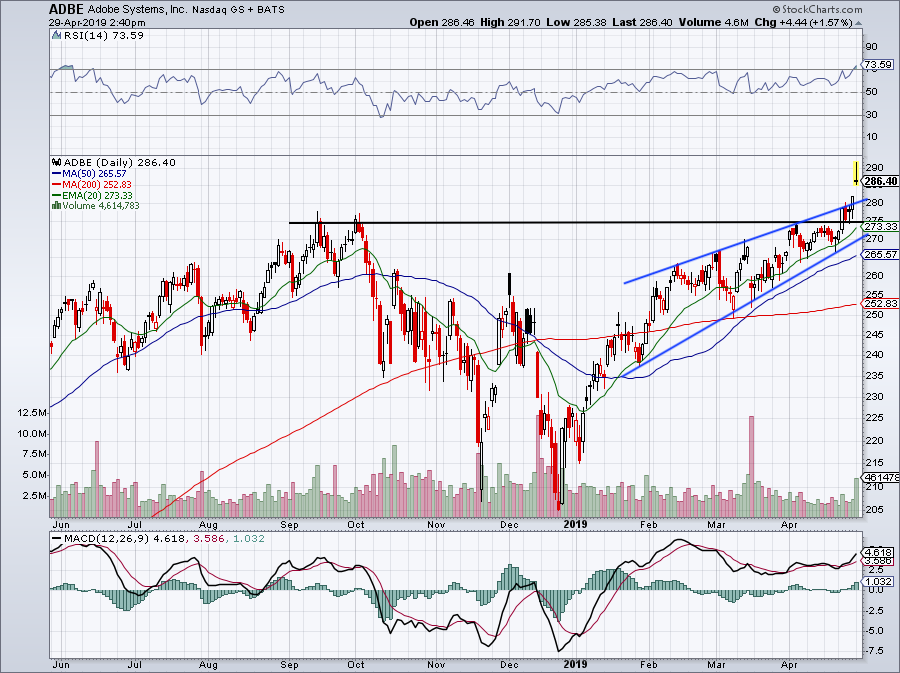 Adobe Systems (NASDAQ:ADBE) exploded higher on Monday, but pulled back off the session highs. Adobe looks tired right now and with an elevated reading on the RSI, a new long position does not favor the bulls looking for a solid risk/reward.

Instead, see how ADBE does on a pullback. I want to see how it handles the backside of prior channel resistance near $280. If it can’t support the stock, look for a retest of a big prior resistance zone at $275. 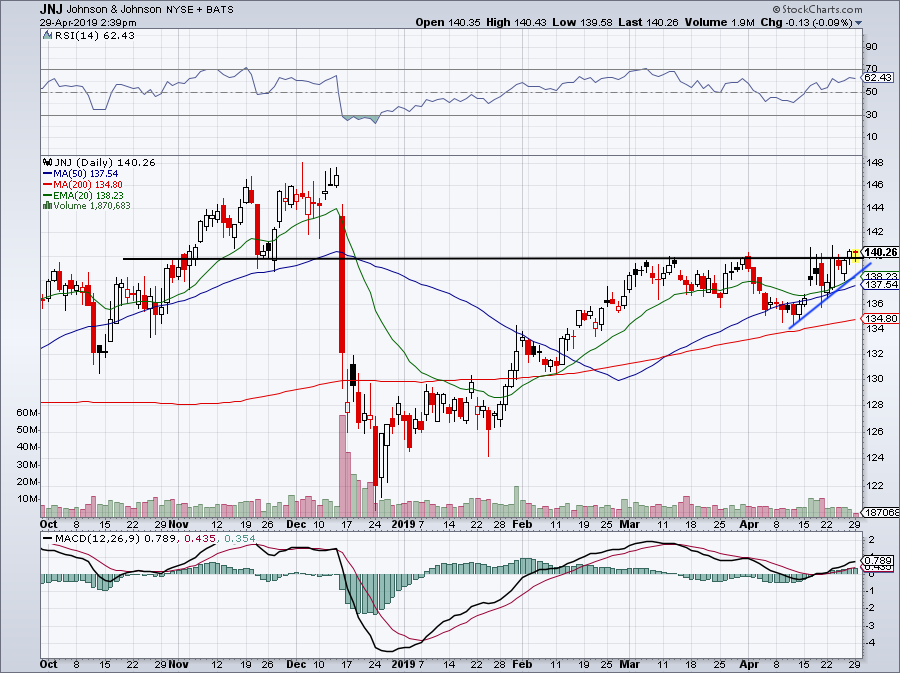 I’m not sure which trade is more boring, Johnson & Johnson (NYSE:JNJ) or the one below, Alibaba (NYSE:BABA). In both scenarios though the stocks look attractive, despite the snail-like pace they’re moving at.

Up until last Friday, $140 had kept a fairly tight lid on JNJ stock. On Friday, the stock closed north of this mark and on Monday, shares are bobbing near this mark.

As discouraging as it would be for JNJ to fall below $140 now, it’s safe as long as it holds the 20-day and 50-day moving averages. Should it maintain this level, look for a possible run to $143 and possible a gap fill up to $146. 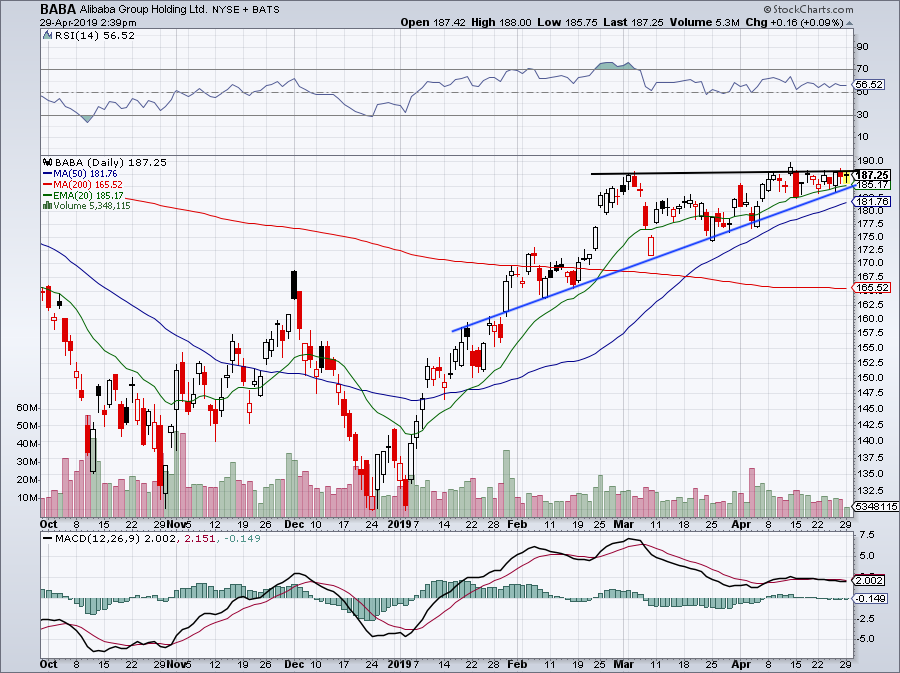 The setups look pretty similar, huh? Alibaba continues to put in a series of higher lows, with resistance near $188. A break over $188 and after clearing $190, Alibaba stock could fly to $200.

On a close below uptrend support and the 20-day, a decline to the 50-day is on the table. This is one we’ve had our eye on, and as often times is the case, keeping it simple works best.

Bret Kenwell is the manager and author of Future Blue Chips and is on Twitter @BretKenwell. As of this writing, Bret Kenwell is long JNJ, BABA, GOOGL, AMZN and AAPL.