The Dollar Index is bucking up against 2-year highs in a run-up that has some strategists wondering if it could be ready to break out.

If that’s the case, stock market strategists say it could start to negatively impact stock prices and threaten earnings gains. 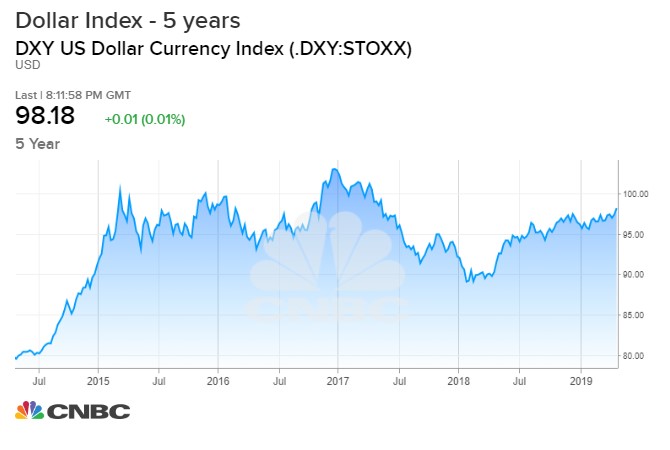 “The market is wrestling with whether this is the real breakout or not. We’ve had quite a day today ahead of the big [GDP] number tomorrow,” said Marc Chandler, chief market strategist at Bannockburn Global Foreign Exchange. “I think there will be a bit of ‘buy the rumor, sell the fact.’ They’re already looking past Q1 GDP. What’s really going to matter to the Fed is Q2 data.”

Chandler said the dollar started its latest leg higher last week after U.S. March retail sales jumped a surprise 1.6%. It has gained 1.2% since then. In addition to strong U.S. data, there was a round of weak European PMI manufacturing data, another factor pushing the dollar up against the euro. U.S. GDP data is reported at 8:30 a.m. Friday, and first quarter growth is expected at 2.4%.

“If we go through $1.10 in the euro, people will be talking about $1.05 and parity coming back,” said Chandler. But Chandler said he believes the rally is getting ahead of itself, for now.

“I do think if this dollar rally stays in tact, what we need is divergence,” said Chandler, meaning the U.S. economy would continue to outperform.

To stop the dollar’s rise against the euro, Chandler said there would need to be real signs that Germany is past the worst and its manufacturing sector is picking back up.

For now, he does not see the dollar making a big gain now, but eventually the dollar index could rise above 100.

Christopher said if the dollar did continue to gain, it would bite into profits and hit stock prices. However, he expects the greenback will ultimately be lower this year against both the euro and yen though it could see strength in the next couple months.

Christopher said a positive outcome would be if China’s economy stabilized, helping the U.S. and then Europe

He is concerned, however, that volatility could pick up, and that there are some risks to the market, including the so far unresolved trade negotiations between the U.S. and China.