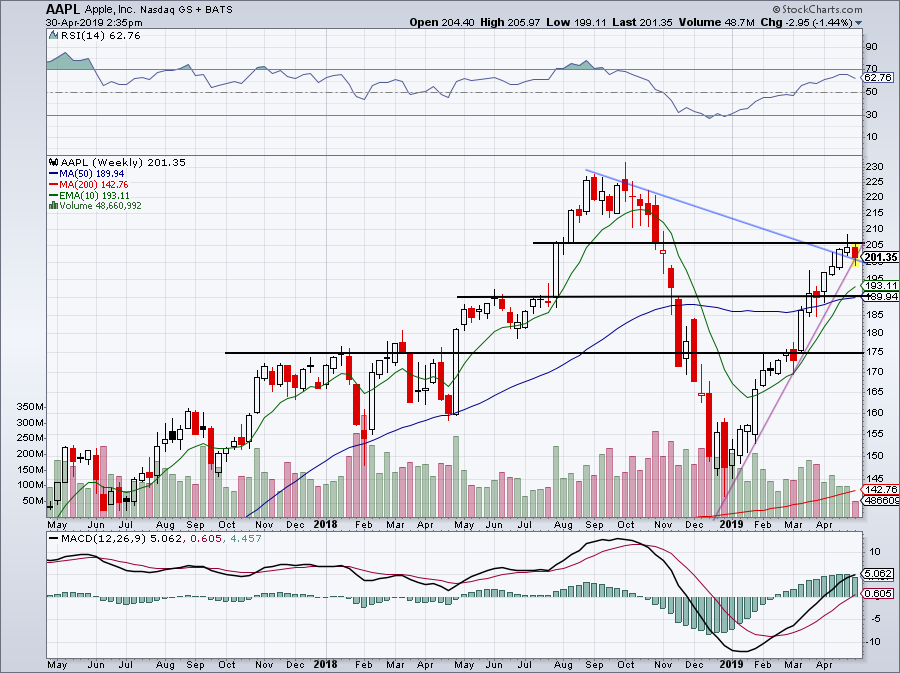 Tuesday’s action just goes to show how strong the stock market has been. Despite an 8% drop in Alphabet (NASDAQ:GOOGL, NASDAQ:GOOG) following its earnings disappointment, the stock market was down but holding up pretty well. Eventually it took a tumble in what looked like it may be the start to the pullback so many have been hoping for.

Instead, the markets rebounded, with the S&P 500 about flat on the day. The action is irritating a lot of traders, but they need to be mindful of the trend. Until it breaks, there’s no reason to be incredibly bearish. On that note, let’s examine some top stock trades for tomorrow.

Most of FAANG has done pretty well post-earnings, with the exception of GOOGL. Investors are hoping that Apple (NASDAQ:AAPL) can trade higher after its report too, on today after the close.

I like that Apple stock has been pulling back over the past few trading sessions. Unlike GOOGL, which we outlined the day before as shares were red-hot into the print, AAPL stock has been retreating a bit.

That doesn’t mean it’s set to rally though. After all, shares are still up about 40% from the December lows. The company will have to bank on solid results, a good outlook and a strong capital return plan.

According to the options market, Wall Street is pricing in a ~$10.60 move in Apple stock, or a little more than 5%. Let’s see if they’re right. 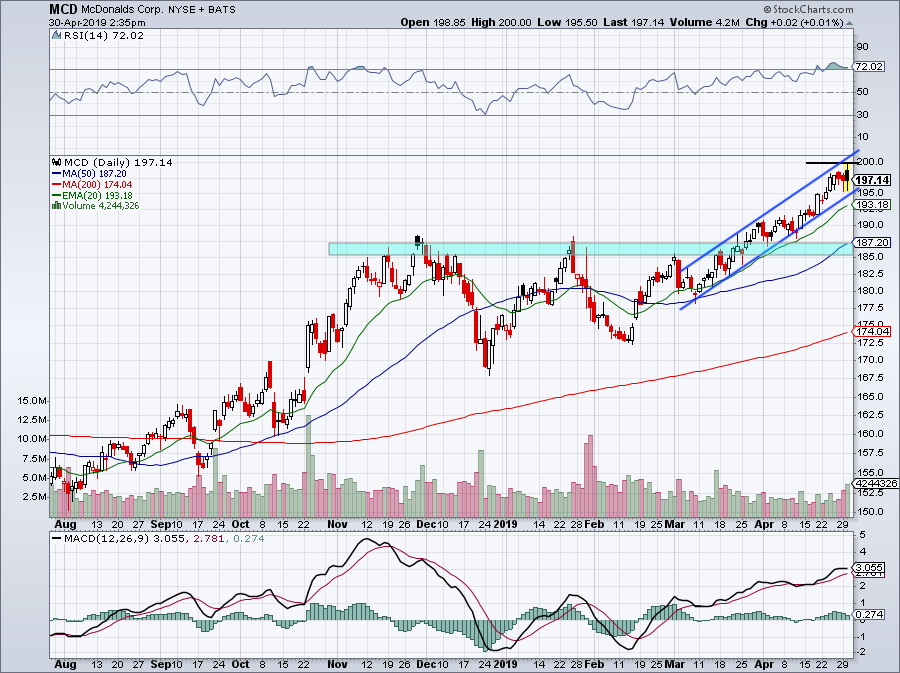 McDonald’s (NYSE:MCD) clocked in at $200 on Tuesday after reporting earnings and that brought in the sellers. Now shares are bouncing around this $197.50 level and the next direction is unclear.

That said, this name has been a beast, and if going short, I wouldn’t look for massive downside. Otherwise, it’s a buy-the-dip name until the trend breaks. 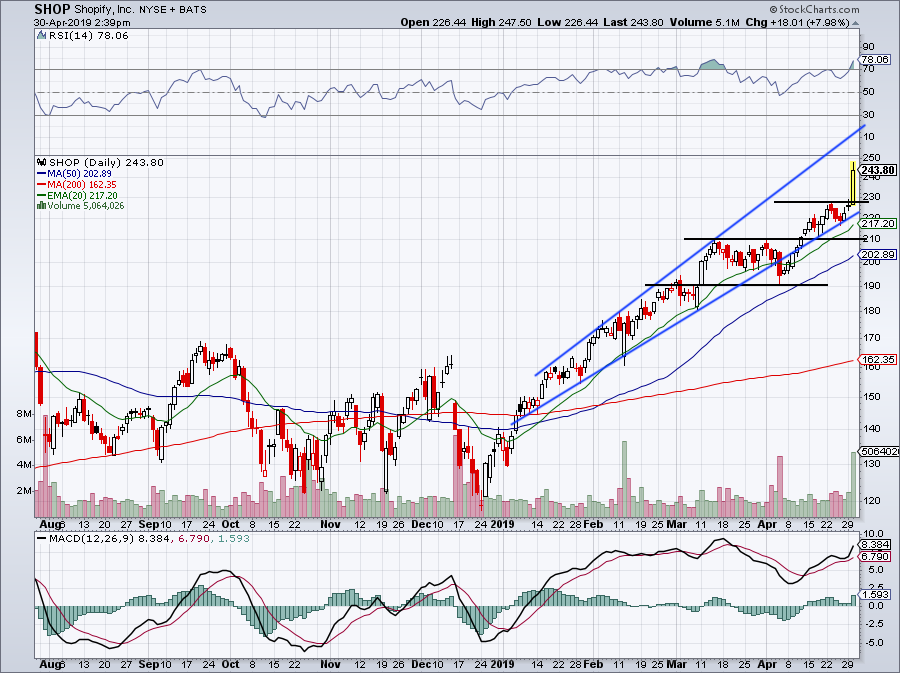 Another beast? Shopify (NASDAQ:SHOP), which continues to rip higher, this time on earnings. Holy smokes this one has been a winner.

While SHOP is overbought, channel resistance still allows for an even higher expansion from current levels. On thing Shopify has done in this trend though? Breakout over short-term resistance and eventually pullback to that level only to find it as support.

Let’s see if we get that kind of action again. Otherwise, SHOP is a pass for me on the long side at this time. But I’m definitely not shorting it. 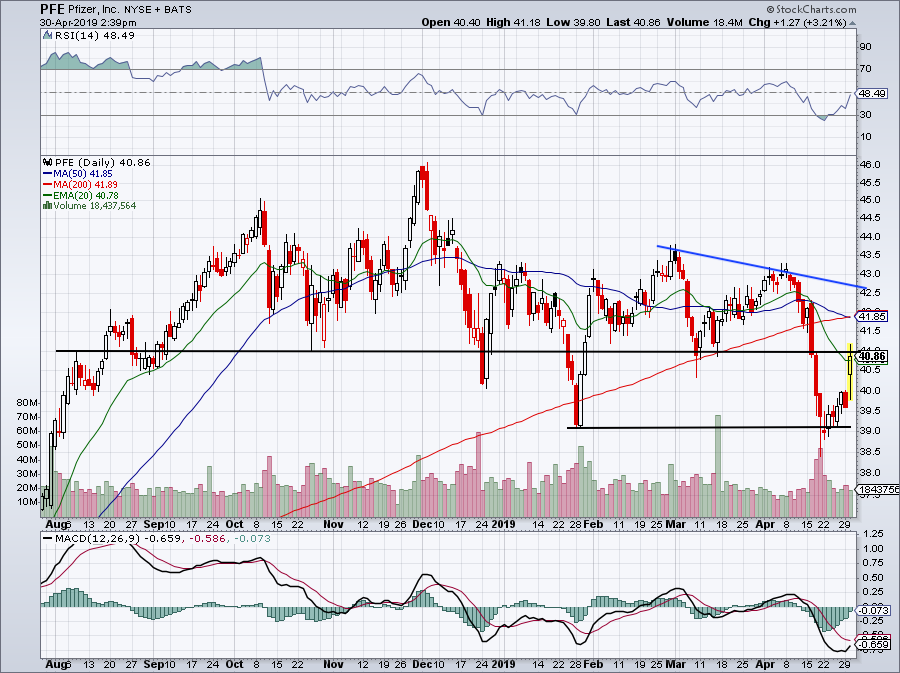 Pfizer (NYSE:PFE) is up about 3% on the day after the company reported earnings. While momentum is starting to improve and the stock is anything but overbought, there are definitely some concerns.

For starters, PFE is struggling with $40, a prior support zone that’s potentially now going to act as resistance. Should it get through $40, $42 is going to be tough too. Here the stock has both the 50-day and the 200-day, with the former crossing below the latter as we speak. I expect that to keep PFE in check. Finally, PFE has been making a series of lower highs (blue line), which is a bearish technical development.

Notice how the stock took out its January lows and quickly reclaimed this level. I normally love that action, but there are too many concerns on the chart for me right now. Over $40 and PFE could give short-term buyers a ~5% run, but be leery at the 50-day/200-day conflux. 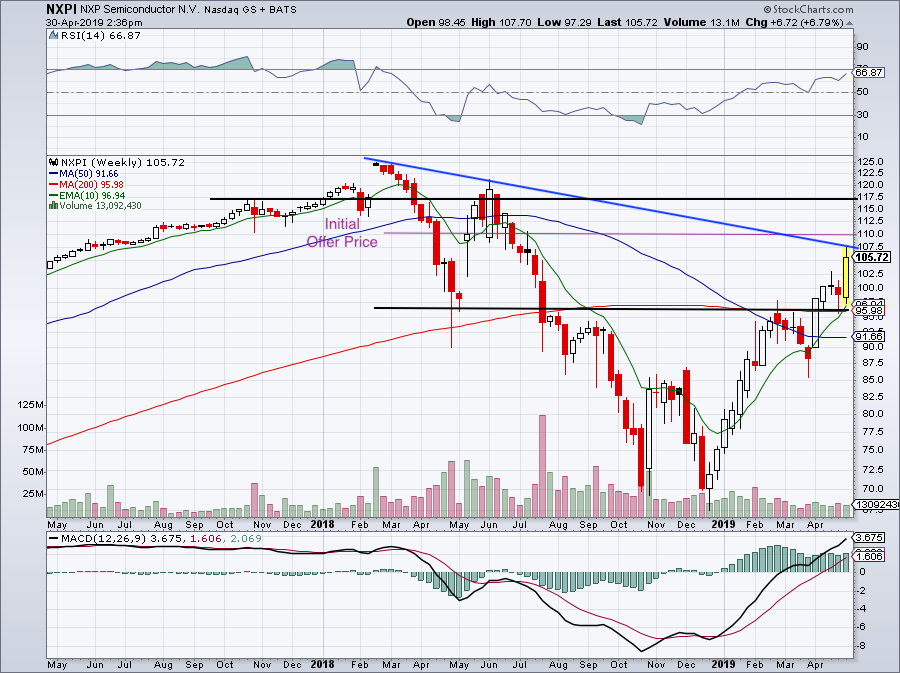 NXP Semiconductors (NASDAQ:NXPI) is ripping, jumping more than 8% after the company reported earnings. The stock was holding up well over this $95 to $97 area, spring-boarding off its 20-week and 200-week moving averages.

Shares are now coming into potential downtrend resistance, although it’s unclear whether it will play a role. More likely, $110 could be an upside cap, given that it was Qualcomm’s (NASDAQ:QCOM) initial offer price for its takeover of NXP a few years ago.

Above that opens the door to the $117s and possibly higher. On the downside, it would be encouraging to see NXPI hold up over $100.

Bret Kenwell is the manager and author of Future Blue Chips and is on Twitter @BretKenwell. As of this writing, Bret Kenwell was long GOOGL and AAPL.