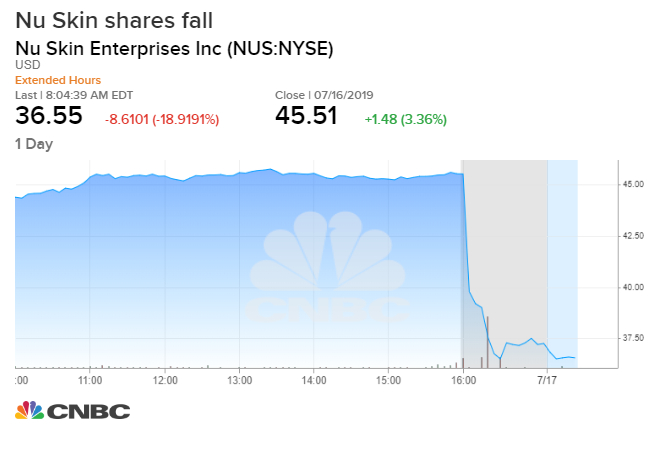 Shares of Nu Skin Enterprises, which distributes health and beauty products via direct selling, tanked on Wednesday after the company said China’s crackdown on health products is weighing on sales.

The company’s stock fell more than 21% on Wednesday.

“We are adjusting our guidance for the year primarily due to a reduced revenue outlook in Mainland China following the government’s 100-day campaign to review and inspect the health products and direct selling industries,” said Nu Skin’s CEO Ritch Wood in a press release.

Earlier this year, the Chinese government launched a 100-day campaign to crack down on illegal marketing, specifically in the sale of healthcare products. China represented 33% of Nu Skin’s revenue in 2018 but the increased scrutiny on the direct selling industry resulted in restrictions on sales meetings which ultimately hurt recruitment of new customers.

“Continued restrictions on sales meetings, as well as media scrutiny, have negatively impacted consumer sentiment and contributed to this adjustment,” said Wood.

“We believe this indicates challenged business conditions will sustain and visibility on any improvement is extremely limited,” Stifel’s Mark Astrachan said in a note to clients.

DA Davidson, which downgraded the stock to neutral from buy and lowered its price target to $38 from $88 on Wednesday, said Nu Skin could not manage through the macroeconomic environment in China, “like it did successfully” in the first-quarter.