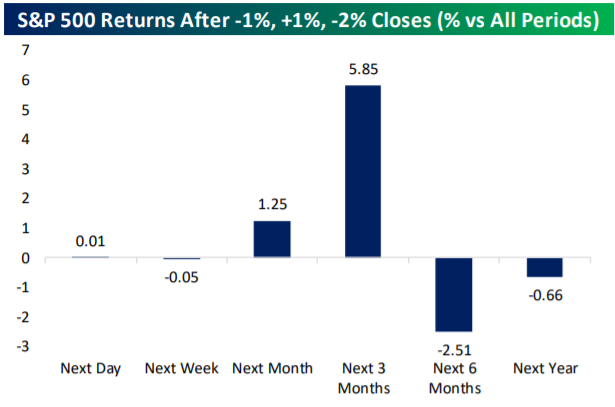 Traders work on the floor at the New York Stock Exchange, August 13, 2019.

The stock market has done something so unusual this week that it has only happened 19 times in the past 30 years, and the strange pattern could be an ominous sign if history is any guide.

The S&P 500 fell 1.2% on Monday, followed by a 1.5% rebound in the next session, and Wednesday’s brutal sell-off saw the benchmark losing 2.9% amid the recession signal from the bond market. This consecutive whiplash for the S&P 500 — down 1%, up 1% and down 2% — is a rare occurrence in market history and going back to 1928, the index has lost 2.5% on average in the six months after the phenomenon occurred, according to Bespoke Investment Group.

For stocks, things could change on a dime these days. Investors, who started Tuesday on edge about the geopolitical uncertainties in Hong Kong and Argentina, were surprised by President Donald Trump’s decision to delay some of the China tariffs, which sent the market soaring instantly.

The rally only lasted for hours as traders got hit by an odd bond market phenomenon on Wednesday that flashed a big recession signal, causing the Dow to plunge a whopping 800 points in its worst day of the year. The Cboe Volatility Index, aka Wall Street’s fear gauge, popped to above 22 on Wednesday.

The market’s wild swings this week caught eyes of some Wall Street strategists, who see the back-and-forths as a troublesome sign.

We “cannot help noticing that the way in which the market is being repeatedly yanked into alternating bouts of optimism and pessimism looks much like the market’s movements when the focus was on a possible resolution to the subprime loan crisis,” Nomura macro and quant strategist Masanari Takada said in a note Wednesday.

The strategist doubled down on his call for a “Lehman-like” sell-off as soon as late August. His call was based on on data showing hedge funds and other players fleeing the market.