It was another good day in the stock market today, as equities pushed higher in Friday morning trade. It’s not hard to see that bulls are getting tired though, as equities faded off their opening highs.

The rebound in equities has been a continuous story line for investors over the past two weeks. And so have the disastrous developments of the WeWork IPO.

What’s Up With WeWork?

WeWork is a real estate company that provides shared office spaces for startups and other businesses.

The idea of WeWork is an excellent alternative to building and office leases, providing startups, potential clients and teams a rich collaborative environment. But that’s not how investors are looking at it. In short, they don’t trust WeWork.

Earlier this year, SoftBank (OTCMKTS:SFTBY) threw money at WeWork, valuing the cash-burning entity at $47 billion after it invested $2 billion. Now? Reports of a continually lower IPO valuation keep circulating. The latest calls for a $10 billion IPO valuation — a whopping 78% reduction from the valuation it garnered when SoftBank invested — and that’s after SoftBank said the company should shelve its IPO plans.

It’s just the latest example of another private-equity unicorn garnering a valuation way ahead of its skis and paying the piper in the public market. Uber (NYSE:UBER) and Lyft (NASDAQ:LYFT) paid the price right out the gate, and while it took some time, Slack (NYSE:WORK) is suffering too.

In the first six month of 2019, WeWork has revenue of $1.5 billion and operating losses of $1.4 billion. How is this model sustainable? Further, its structure couldn’t be more complicated. Have a look (again, from the S-1): 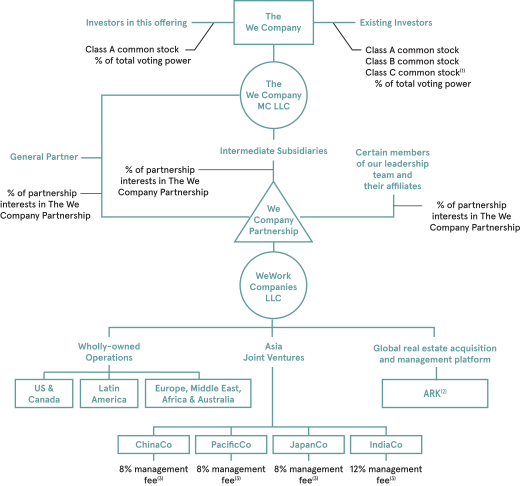 Finally, co-founder and CEO Adam Neumann raises some red flags. For instance, by buying properties and then leasing them back to his own company. Or Neumann being a managing member of an LLC that owned the “We” trademark that then sold said trademark to WeWork when it rebranded as The We Company for a cool $5.9 million.

I don’t know Neumann personally — obviously — but what kind of founder-CEO does this type of stuff? There are 10 pages of disclosures on Neumann in the S-1, who has voting control via a three-class share structure. In June, three former executives launched a lawsuit against We ranging from sexual harassment to age discrimination.

Lastly, We saw its lease obligations jump from $34 billion to $47 billion in the first six months of 2019. How’s the company going to cover those obligations as its operating losses swell and without free cash flow? What’s it going to do when — not if — a recession strikes, either in the U.S. or globally, or both?

These are serious questions that need serious answers. I’m not trying to dog on We, but man, you do not see a pre-IPO show turn into a circus act with a near-80% haircut in valuation without there being some serious flaws.

If this company ultimately goes public, be sure to do your due diligence.

Movers in the Stock Market Today

One IPO that’s not disappointing investors — like SmileDirectClub (NASDAQ:SDC) on Thursday — is Cloudflare (NYSE:NET). Shares jumped 20% on the day, closing at $18. Despite pricing at $15 per share, well above its original $12-$14 range, shares still found a bevy of buyers on Friday.

Apple (NASDAQ:AAPL) stock sank 1.9% on Friday, after enjoying strong gains for most of the week. Despite rallying after unveiling its new iPhone, streaming plans and other products on Tuesday, not everyone is on board.

One Rosenblatt analyst sees lower demand for the iPhone 11 and argues that sales could disappoint. He has a “sell” rating and Street-low $150 price target. Another analyst from Goldman Sachs says that Apple’s plan to offer one year of Apple TV+ for free when customers purchase certain new devices could have a “material negative impact.”

However, analysts at Cowen noted that Disney’s strength at the box office this year could make for a very difficult comp next year. To be honest, it’s hard to argue that point, but Cowen must still be optimistic, maintaining a $154 price target.