The market didn’t end last week on a high note, but then again, it didn’t need to. Even with Friday’s 0.07% setback for the S&P 500, the index still mustered just a little less than a 1% advance for the five-day stretch. That makes a third winning week in a row.

Oversized Apple (NASDAQ:AAPL) is the reason the broad market could get up and over the hump, falling nearly 2% in Friday’s action after investors rethought the costs related to the company’s strategy of attracting people to its hardware and new streaming service. That impact was more than smaller names like General Electric (NYSE:GE) could offset. GE was up nearly 1% on the last day of last week, buoyed by optimism surrounding what should amount to a $5 billion debt reduction, funded by asset sales.

As for names worth exploring as Monday’s action gets going, however, the stock charts of Facebook (NASDAQ:FB), Microsoft (NASDAQ:MSFT) and Merck (NYSE:MRK) are of the most interest. Here’s why. 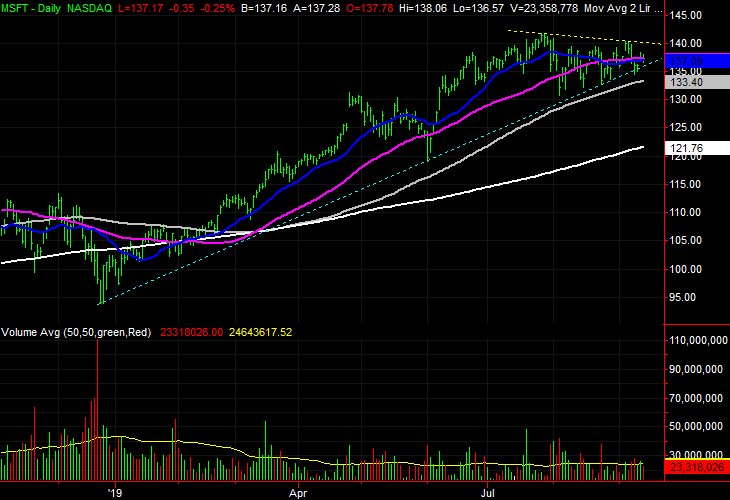 There’s no denying Microsoft shares have been one of the market’s best and most reliable performers for years now. Even the headwind that hammered most names late last year wasn’t horrific for MSFT stock, and shares recovered quite nicely this year from that lull.

This year’s overheated rally looks like it has run its full course though, progressing even faster than the 2017/2018 gain. Although it’s not past the point of no return yet, the action since late July suggests the bears are taking their shot. They’ve been nice enough to leave clear clues. 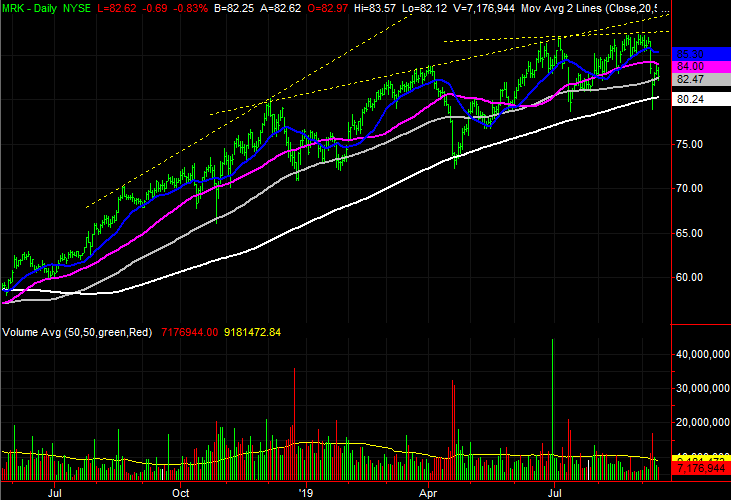 Shares of drugmaker Merck have dished out a healthy, even if at times uneven, rally over the course of the past year and a half. Even factoring in the current lull, MRK stock is still up 56% from its early 2018 low.

The complexion of that advance has slowly but surely — maybe even imperceptibly — taken a turn for the worst though. While still seemingly in bullish mode, the momentum is fading and the pokes at key technical floors are more frequent and more potent. 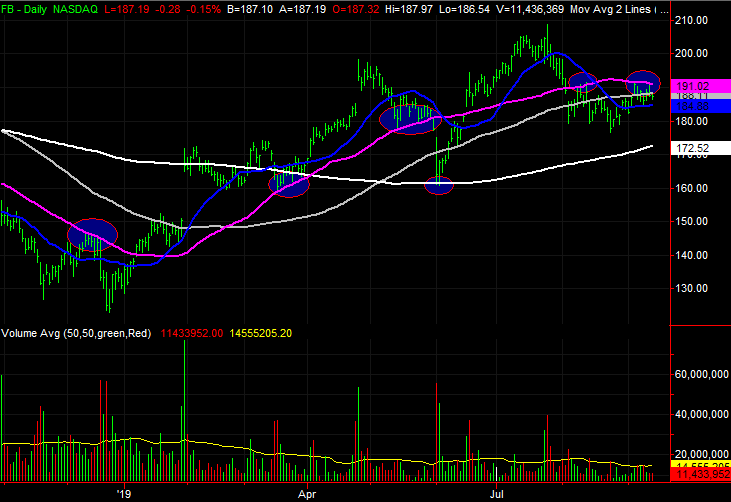 It’s interesting. All stock charts demonstrate some degree of interplay with their moving average. Sometimes it means a lot, and sometimes it means little. It’s something that at the very least has to be respected though.

To that end, Facebook has been strangely responsive to its moving average line, sometimes being stopped and reversed at them, and other times being blasted past them when they’re passed. That’s what makes the past couple of weeks so curious … and a little bearish.

As of this writing, James Brumley did not hold a position in any of the aforementioned securities. You can learn more about him at his website jamesbrumley.com, or follow him on Twitter, at @jbrumley.