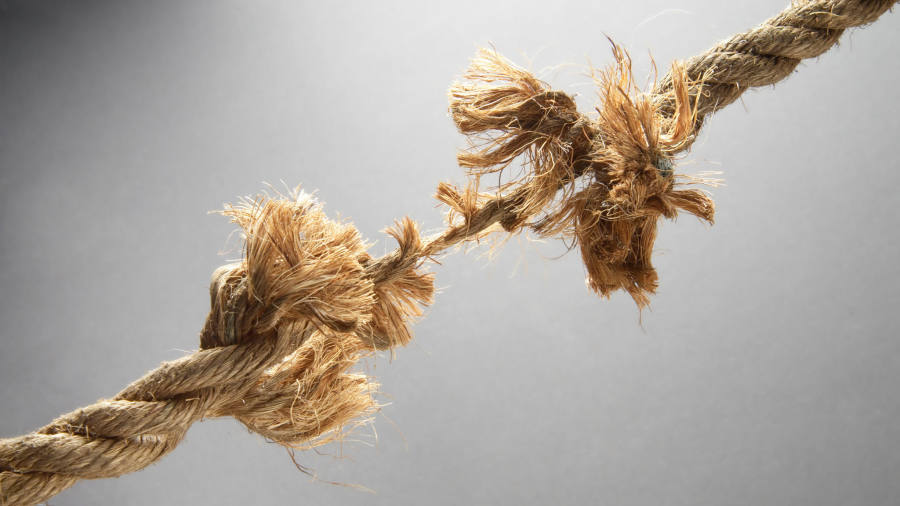 FT subscribers can click here to receive Market Forces every day by email.

Markets tell stories through numbers. One that has stuck out for investors since the outbreak of the coronavirus last month is a tale of contradictions: how all-time highs for major equity markets have run up against new yield lows across areas of fixed income alongside sharply weaker oil and metals prices.

Such mixed messages usually mean either havens or risk assets are “cruising for a bruising”. In that respect, equities are stumbling, and badly, with a European slide of 3.8 per cent on Monday (a one-day drubbing last seen in June 2016 after the UK voted to leave the EU). The tumble wiped out the Stoxx Europe 600’s gains for the year. Wall Street had its worst day in two years, declining 3.4 per cent, erasing the S&P 500’s gains for 2020. Implied S&P 500 volatility surged beyond 25, a level the Vix last frequented in late 2018.

Fraying sentiment for equities has been triggered by the spread of the coronavirus beyond China, as highlighted by Italy imposing a strict quarantine across at least 10 towns near Milan, the country’s financial and business centre. Both Switzerland and Austria announced enhanced checks along their borders with Italy on Monday. Also of note is the surge in cases in South Korea and Iran, with more countries across the Middle East reporting incidents of coronavirus.

A rising number of infections outside China mean greater disruption for the global economy and represents a shot across the bow of investors anticipating a swift rebound. A ‘V’-shaped recovery in global activity may well ensue in the coming quarters, and propel equities beyond their recent peaks, while weighing on havens such as gold, the US dollar and sovereign bonds. But on Monday, and perhaps for a few weeks, the bullish equity thesis faces a lot more scrutiny.

One only needs to cast an eye across Monday’s sector performance of Europe’s Stoxx 600 index to gauge the extent of the wake-up call for investors. Sectors led by travel & leisure, basic resources and auto & parts have duly slumped more than 5 per cent. But the recent equity havens of utilities, healthcare and real estate also suffered notable declines, illustrating how sentiment is souring broadly.

“The spread of the virus outside of China, not only to neighbouring countries but also to Italy and the Middle East, combined with continued heavy restrictions within China, challenges the assumption that the outbreak will blow over with only limited damage to the global economy. If travel restrictions and supply chain disruptions spread, the impact on global growth could be more widespread and longer lasting.”

Against that backdrop, recent buyers of government bonds and gold are surfing a very strong haven wave. The US 10-year Treasury note yield has fallen below its 2019 nadir of 1.42 per cent, which leaves the benchmark targeting its 2016 post-UK referendum low of 1.318 per cent. Other leading sovereign benchmarks are following a similar path, as shown here.

The 30-year Treasury sold earlier this month at a record-low yield of 2.06 per cent has performed impressively with its yield falling towards 1.81 per cent. Gold loiters just shy of $1,700 an ounce, ignoring a stronger US dollar and simply rallying as the world of negative-yielding debt rises from its pre-coronavirus level of $11tn towards $14tn.

Now it bears repeating that investors with a diversified portfolio split between equities and bonds, along with an allocation towards gold, are probably feeling less animated about matters. So far this year the Bloomberg Barclays index of 20+ year Treasury debt has generated a total return of 9.1 per cent (up 24.8 per cent over the past 12 months). Meanwhile, spot gold has risen 10 per cent this year, helping to offset weakness in riskier assets within a diversified portfolio.

But there are limits as to how supportive lower bond yields are for risk assets. The gloomy bond market message, as highlighted by 10-year US yields falling further below those of three-month bills (at minus 18 basis points, the largest gap since October) does at some point challenge equity sentiment. As shown below, the latest leg of the equity market rally began last August and accelerated from October when looking at the FTSE All-World index (including and excluding the S&P 500).

Both measures are now below their respective lows triggered by the outbreak of the coronavirus in mid-January. This suggests a bigger correction beckons and certainly plenty of investors would argue a dip in the region of 10 per cent would hardly be a surprise after such a strong run and may also be a buying opportunity. The trade war-inspired sell-offs seen during May and July of 2019 fell short of a standard one-tenth correction.

Ultimately, plenty rests on whether the virus is contained and stimulus offsets an expected hit to growth and corporate profits. But before that point is reached, haven assets are likely to retain support as equity sentiment faces tests in the form of companies’ profit warnings and economic data missing expectations. Faith that monetary and fiscal stimulus will limit the damage in equities and credit remains widespread, but such views may be challenged.

“Among people trying to justify equity markets at these levels, there seems to be some confusion about supply versus demand shocks and about the effectiveness of stimulus. So far, the world is suffering the beginning of primarily a (likely substantial) supply shock, with increasing evidence of a demand shock (particularly in China) on top of that.”

“Policy stimulus can partly address demand shocks, but it is much more complicated, if at all possible, to offset supply shocks,” adding, “It’s now a virtual given that global GDP will take a major hit in Q1, but it could just as well be a longer-lasting effect, and the uncertainty, let alone the actual hit to growth and profits, is not reflected in equity markets.”

That may take time to register with buyers of the dip in equities, with the risk of leaving them with buyers’ remorse. Playing an important role here is the current low level of bond yields and, as BlackRock highlights, the main beneficiary among equity styles since the coronavirus emerged has been that of momentum, as shown here.

“Momentum has a relatively high exposure to the information technology sector (21% of the MSCI World Momentum index), which has been the leading global sector performer so far this year. Momentum is also populated with ‘bond proxies’, or dividend-paying companies in healthcare and consumer staples.”

Such stocks are vulnerable in the event of a sharp rise in yields but, as seen since late December, corrections in government bonds have been limited with opinions far less optimistic about 2020 being a year where global growth accelerates. The pronounced slide in oil prices in recent weeks mitigates inflation pressure via shortages of goods and supply-chain bottlenecks. Also the prospect of greater government spending in the wake of the coronavirus is not an issue for bond markets, at least not yet.

For equities, a troubling outcome would be a pronounced period of much lower yields, particularly among real or inflation-adjusted yields. At minus 0.15 per cent, the US 10-year real yield has dipped to its lowest level since 2013, and was above 0.2 per cent as recently as November.

Equity strategists at Morgan Stanley caution that the stock market views the slide in real yields “as more a technical signal rather than a recession concern, like in August 2019 and January 2016”.

But it warrants scrutiny, adding:

“Instead, we think it’s more likely to be an excessively low level of rates that the market will no longer take as a positive for equity valuations. We think it may be more important to watch real rates in this regard.”

I’d love to hear from you. You can email me on michael.mackenzie@ft.com and follow me on Twitter at @michaellachlan.